I have been wanting to buy some sort of sandwich grill for some time now. I heat up the kitchen with the stove top almost daily making grilled cheese sandwiches so I thought it would be worth the savings in electricity to purchase one. Originally I wanted a panini press but thinking of the kids and what they like to eat, I realized that that probably should wait a couple years and a simple sandwich press would suffice. I browsed amazon.com

for a while and finally came across one that looked like it would do the job for a great price. The one I chose is the Proctor Silex Meal Maker Sandwich Toaster 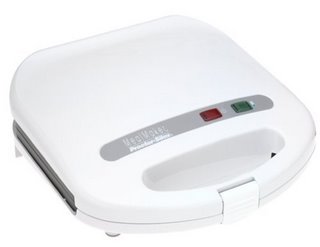 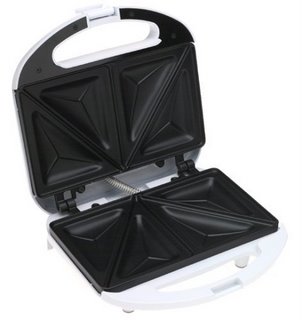 I like this little gadget a lot, we just received it yesterday and have already used it three times. I learned quickly that you have to be very careful using cheese with this. American cheese is NOT the best type to use because no matter how little you use, it tends to ooze out. The cheese is not impossible to clean up but it's messy It works better when you place the fillings towards the center of the bread or whatever you are stuffing. I first made grilled cheese sandwiches for my girls (big mess!). Then this morning I tried something different. I used white bread for the girls and made a few different types of sandwiches... peanut butter and honey, grape jelly and cream cheese with honey and cinnamon. They loved them all but the cream cheese and cinnamon got the highest vote. I also tried using tortillas which I stuffed with refried beans and those actually worked the best, the edges sealed very well and they were nice and toasted without being dried out.

I think one of those sandwich makers on the TV infomercial (I forget the name) would probably work better because the wells are deeper and you can do more with it, but for $14.97 this was worth the money. You can use it for pancakes, omelets, stuffed biscuits and lots more. I'm sure we will come up with lots of neat ideas in the days to come :)
Posted by Michele at 12:46 PM

Email ThisBlogThis!Share to TwitterShare to FacebookShare to Pinterest
Labels: kitchen gadgets and goodies

That sounds like a great little gadget. I'm sure I'd love it because it means stuffed pockets of any kind. And, to me, that spells out YUM YUM YUM!

I think you'd really like it Nerissa! I loves stuffed pockets too :) I'm seeing pizza pockets in our future, those are my favorite! :)

Must have been messy, but I'm sure tasted really good! Yum! I think I'd like one of these gadgets!

I have one of those - gosh, I haven't used it in ages. Maybe next weekend. I'll have to try the pancake trick!

Aren't they fun Dawna? I'm thinking cheese biscuits for this morning. I'm loving not heating up the kitchen with the temps here already in the 90's.

How would you make a pizza pocket? I'm considering buying one.

Pizza pockets would be great in this. I would suggest crescent roll dough or pizza dough, rolled out very thinly. Use a minimal amount of toppings right in the center of the dough. Should work great!

Pizza ones are really easy and can be done with tortilla (flour). Just put the cheese, and a few pepperonis (or what ever meat you prefer) in the center on all 4 of the divits. (making sure to put a little butter on the grill area before the tortilla). then put a second tortilla on top, and cut away the extra overhang. Leave it closed for 2-3 minutes and they taste really good.

I don't use any form of sauce in mine due to a tomato allergy, but I'm sure adding in your sauce of choice won't affect anything.