Today was a busy kitchen day. I started out by baking some yams that I had bought on a whim. I'm not sure exactly what I want to make with them so before they could spoil, I rubbed them with a little oil, wrapped them in foil and baked them at 350 degrees for about an hour and 15 minutes. I then peeled them and mashed them and put the mash into ziploc bags and into the freezer for future use.

After that I took out a sack of oranges that we had bought but just never ate ... they looked a bit sickly but still usable...don't you hate when things get pushed to the back of the fridge? :) To salvage those I juiced them and poured the juice into a freezer bag for the future.

By this time, after going back and forth from the kitchen to rearranging my daughters' room and doing laundry I realized that I had no idea what I was going to do for dinner. I looked in the refrigerator and realized we had Ropa Vieja, leftover black beans, leftover pinto beans and all the fixings for salsa (same as my pico de gallo recipe but I puree it in the blender). I decided to make chimichangas, refried beans with the leftover beans and lettuce, cheese, sour cream and salsa on the side.

I don't really have a recipe, per say, for chimichangas, so I will explain my usual method for making them.

First add about 2 inches of canola or vegetable oil to a deep skillet. Set the temperature to medium/medium-high and allow to heat until you see ripples. I used soft taco sized tortillas. Into the center of each one I spooned two heaping tablespoons of the meat along with some shredded cheese. I then rolled them up burrito style and held them tightly with tongs. Next comes the scary part... be VERY careful, the oil tends to splash! Put them (I do one at a time) into the oil and as soon as they seem to hold together well slowly release them from the tongs and let them cook a few seconds. Then turn them gently. Watch them carefully and monitor your heat, they will burn quickly. Once they reach a nice golden brown, remove them to a paper towel lined plate. I actually stand mine on end in a bread pan lined with paper towel, they seem to drain better this way. Serve immediately.

Here's how I make the refried beans. 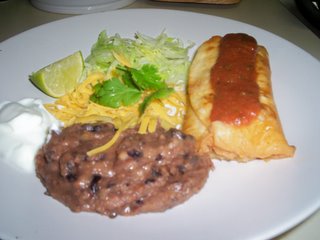 Love the presentation and the bean recipe. I had no idea that making chimichangas at home was that easy (yet dangerous):)
I'll have to try this next week.

Susanne, it really is easy! In fact my sister bakes hers (less dangerous, LOL!) Will have to get her recipe so I can post it. Let me know how yours turn out :)