In my family, Christmas nowadays is kept small. Since the divorce between my mum and dad we don't get together in the "big family way" we used to. We've also basically stopped the whole gift thing and decided to focus on food and drink and having a good time talking and reminiscing instead.

Going home to Sweden for Christmas this year I thought a bit about the lack of traditions, Christmas rituals, in my family. We don't really do much these days, I thought, other than meet, hang out, eat and talk. When I was a kid it was different, we used to do all those things I have come to associate with Swedish Christmas, which as you may know is celebrated on Christmas eve and not Christmas day.

Me and my brother of course used to wake up early and rush down to the lounge room where the really big Christmas tree somehow as if by magic had opened its' lower branches to reveal a mountain of gifts. All wrapped in colorful paper, with little cards with rhymes on them. To keep us busy mum and dad always bought a bunch of books and magazines, that they put underneath the Christmas goat, standing next to the tree. The deal was that we could take anything that was underneath the goat, but we couldn't touch any of the gifts under the tree.

Those magazines usually kept us busy until TV started and mum started fiddling about in the kitchen getting everything ready or we all got in the car to go over to my cousins, depending on which year it was. Then late lunch, a real feast, after that Donald Duck on telly and finally we would hand out the gifts (which by now of course had been thoroughly examined, squeezed, shaken and marveled over by all the kids).

Since we don't do gifts anymore, and me and my brother no longer need to be kept busy with magazines until we can sit down at the dinner table, focus these days is on food. So when Christmas comes around mother starts pulling out all those old recipes, that she has inherited from her mother, who got some from her mother, others from her aunt and so on. While sitting there on the train, headed for my home town, I started thinking about all that food and candy. Mum's home made onion pickled herring, her marvelous and juicy spare ribs, the Christmas ham in its' golden cover of breadcrumbs and mustard, the brown and green cabbage, the caramel toffee that we always have for Christmas and only then... There it struck me. We have lots of traditions still, all in the form of recipes. And they date back generations, handed over on small hand scribbled notes or just by mouth and memory.

Never given it much thought, I suddenly felt a bit silly that even though I am quite the foodie not even once ever asked my mum how she did all that food, or where she got the recipes from. So this year I decided to start the pleasant work of making sure those traditions live on. Starting with that typical Christmas candy, a caramel toffee concoction, I am going to try to learn how to make all those typical family things we always have had on our Christmas table.

As I asked my mum about the recipe for that candy, she told me that this particular treat is known in our family as "Aunt Olga's caramel toffee". Apparently my grandmother's father's sister Olga is credited with the origin of this recipe.

There aren't very many ingredients, making it look deceivingly simple to make. Don't let that fool you however, getting toffee right seems to be an art form... My mother warned me, saying that it is almost impossible to get two different batches look and feel the same. Either they get hard and crunchy, or they get soft and chewy. Taste is generally about the same though, a rich, creamy taste that I associate very much with Christmas.

Having learned the hard way that my mum usually is right, I realized when reading the brief instructions that this may be the hardest thing I ever set out to cook. Sure, that twice cooked pork fried in Chinese master stock was a long and complicated process involving lots of ingredients, but this... I am not sure, it seems to require a lot of fingerspitzgefÃ¼hl. But I am probably going to have fun trying to get this right everyChristmass. 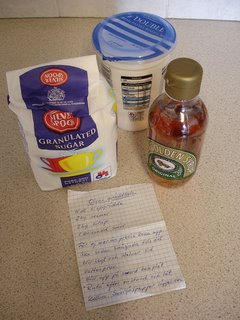 Mix the ingredients together in a sauce pan and bring to a gentle boil. As soon as it starts boiling, lower the heat just enough to keep it simmering. 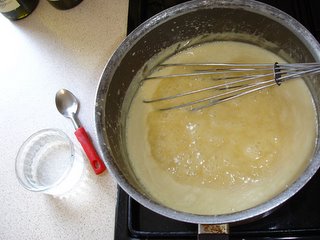 Let the mixture simmer until it goes thick (can take well over an hour), then do the "water test": take some of the mixture on a spoon and drip it in a glass of water. It should solidify as it hits the water and turn into a solid, spongy drop of caramel. 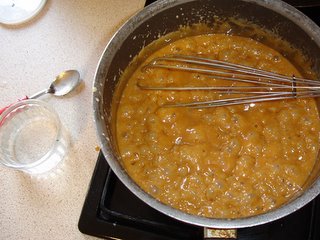 Butter a baking plate and pour the mixture on top, it should be a layer about three to five mm thick. Let cool for a while and then using a sharp knife cut it into bite sized pieces. Then let it cool entirely. Once cool and stiff, break pieces apart and wrap in grease proof paper. 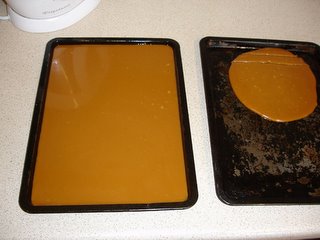 Here's a tip. Once poured on the plate, leave it to settle for a while and then make lines with a knife, criss crossing the toffee in bite sized pieces. Then put the whole plate in the freezer for a few minutes, it makes it so much easier to break apart the pieces. 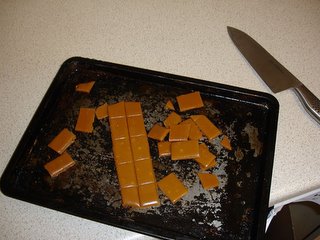 Wrapping all the pieces in individual papers was quite boring work, but it felt good doing it, knowing that I am actually doing something that has been done in my family for generations. And you know what? They even taste the same as grandmother's. 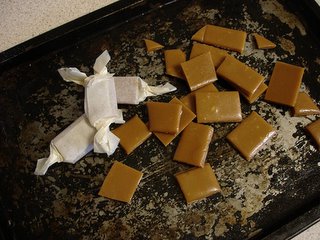 Wow! What a post! i will give anything almost....anything to swap place with you, Magnus. Those recipes are to die for....wish my family have them but unfortunately, both sides of family dont keep recipe...chinese was quite illiterate back in those days.

Happy New Year and May u recover soon.

Michelle, great guest u have.

Manne - it looks like you got it right on the first try!

Thanks for the nice words. :) Yeah,seems like I got it right. Mum was impressed, and my flat mate antipodeans have been chewing their jaws off the past few days. ;)