Thanks to Nic over at The Baking Sheet, I just completed the most well received baking project in a long time. Although I find lots of great recipes that I can't wait to try, my little ones often complain about the texture, taste or appearance of many things. So when I set out to make Nic's Homemade Pita Breadad today I expected that there would be at least one complaint when it was served. I was pleasantly surprised when my 6 year old declared these "50 times better than tortillas" and my 4 and 1 year olds both sighed a satisfied "Mmmmmm!" with their first bite. We ate them simply with thin slices of Colby-Jack cheese but there are plenty left for a bowl of hummus that I plan to make tonight and the "taco fillings" my 6 year old requested for tomorrow.

Homamade pitas are nothing like the store bought variety. They are delicate yet chewy and they are not at all brittle nor do they fall apart when you attempt to stuff them full of your favorite filling. Some of them will puff up and have a ready made pocket when you cut them open and some will need you to slit them with a knife before stuffing. Either way they are amazing! 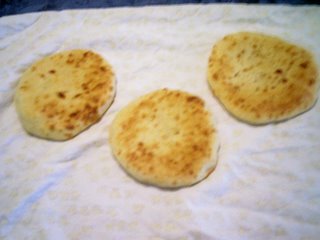 Combine sugar, water and yeast. Let stand for 15 minutes, until foaming. Stir in salt and flour until fully incorporated. Turn out onto a lightly floured surface and knead until smooth, about 5 minutes. Allow to rise in a lightly oiled bowl until doubled in size, 1 1/2 hours. Turn on your broiler and lightly oil a baking sheet. Punch the dough down, divide it into 10 pieces, and gather each piece into a ball; keeping all of them lightly floured and covered while you work. Allow the balls of dough to rest, covered, for 15 minutes so they will be easier to roll out. Roll out until balls form circles about 1/8 - 1/4 inch thick. (I used my Tortilla Baker to flatten them). Place on baking sheet and broil for 3 minutes, until lightly browned. Flip over and broil again for 1 1/2 - 2 minutes. You just have to keep an eye on these guys depending on how hot your broiler gets.
Remove from oven and cool between kitchen towels to keep the pitas moist. Store in an airtight container.
Posted by Michele at 1:15 PM

How cool to make your own pita bread! I'd like to try this too!

Paz, you really should try it, it is so much fun and much easier than I thought it would be.

I've never actually tried making my own pita, but this recipe looks easy enough to try!

fiber, you really should try these, they are delicious and so easy to make!