Winter is always the time that I begin to crave nice warm bowls of soup. Thick, creamy soups are always a favorite around here. My girls have been sick with colds and my oldest requested chowder yesterday. This recipe really hit the spot for her and helped her sore throat feel much better! This is the recipe I came up with based on several I found on-line and from friends. It came out wonderful and will certainly be a staple for us. To go along with them I made Spicy Cheddar Muffins which were form a recipe I found at King Arthur Flour. I did cut down the cayenne quite, cut the pepper in half and added a little Smoked Paprika for extra flavor. They were wonderful! 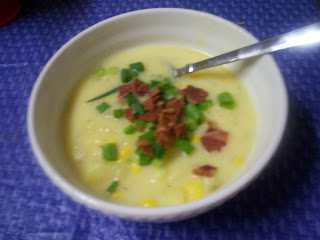 In a large stock pot, melt 2 Tbsp. of the butter. Add onions and celery and cook over medium heat for about 8 minutes, stirring frequently, until veggies are soft. Add broth and potatoes. Bring to a boil then reduce to a simmer. Cover and let simmer for about 30 minutes or until potatoes are soft. Mash a few of the potatoes right in the pot to release the starch as a thickener. Stir the corn starch into the milk then slowly pour into the pot while stirring. Stir in cheddar cheese until it melts. Cut cream cheese in small pieces ans stir in until it melts. Stir in dill. Season with seasoned salt and pepper to your taste. Finish bu stirring in the last two Tbsp. of butter until melted. Serve garnished with bacon bits and sliced scallions. 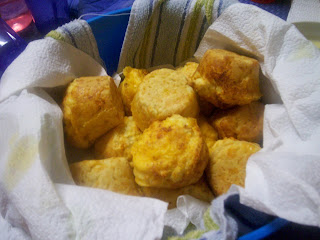 They were wonderful Cate! Hope you get a chance to try them too :0)

This look insanely great. You just made me very hungry.

You really should try it Erik, it's wonderful! One dish my husband and kids will eat and ask for seconds every time.

Chowder was very tasty but just a bit too thin - next time I'll use 4 cans (14 1/2 oz) of broth. Ecellent flavor! Muffins were fantastic. Recipe neglects to say when to add the corn - I added it just before the milk and starch.